Notes from the Transhuman Frontiers

Writing is not natural for me. School tasks such as writing about your holidays or knocking out different kinds of essays were like pulling teeth; each word dragged kicking and screaming onto the page. Partly, that was because I never felt happy with the quality of my handwriting, but mostly because I like thinking about what I’m going to write first. Some people write to think, the words flowing out on the page as their thinking is shaped. Hemingway is to have said that writing was sitting down at your typewriter and bleeding; I can relate to that.

As an academic who has to write in various contexts from academic articles, books, course materials, grant applications, and popular articles I’ve had to learn to write and develop rhythms and methods for getting the words down on paper. So, I play to my strengths: diagramming; making checklists of key ideas; building precise, detailed structures for each piece of writing; and good indexed systems of resources to be used.

You’d think in a digital age I’d do this mostly on a screen, but on the whole any writing project starts out with a blank piece of  white A3 (preferably) or A4 paper and a couple of coloured pens – a cheap but effective black roller ball pen and then a few Stabilo Fineliner pens. Ideas are thrown onto the paper; possible structures laid out; random thoughts in other colours; and myriad lines, boxes and arrows connect, separate, and shape all of these ideas and structures. Notebooks also play a part, with notes being made as they occur to me regardless of whether I have battery power for a device, and I always have a notebook with me in my bag or some extra sheets of paper folded in my back pocket. From these outputs I move to capturing this information in some sort of digital format.

I could, of course, do this from the beginning on my laptop – I have a Surface Book 2 with a detachable tablet screen and a Microsoft Bluetooth pen to write on that. Using applications like Scapple (an excellent, minimalist mind-map-like programme), Evernote, and OneNote (both for note-taking, lists, and some drawing input) would work as well, but what isn’t captured is the tactile, sensory experience of drawing and writing from the feel of pen on paper through to the smell of the notebook and ink. There are some options here that might work such as the Wacom Bamboo system of physical and digital notetaking or the reMarkable tablets which are crazy expensive. 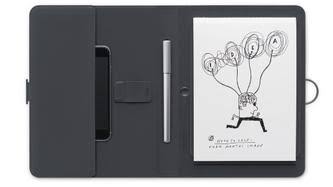 That said, I have a licence for Scapple (which I use mostly as an electronic whiteboard in lectures incl. video-broadcast lectures), an Evernote subscription (which I use a lot for notes in meetings and often for writing conference abstracts), and occasionally use OneNote at work. They’re all quite good in their own ways, but do want you to work a certain way which you have to learn.

What I do use for every writing project though is Literature and Latte’s Scrivener software (see Using Scrivener for academic writing and Writing Tools). It provides the tools that allow me to easily transfer the ideas and structures from paper into a similar format inside a project and to break my project down into movable chunks, include PDF and Word files as resources, and works mostly okay with Endnote (which I use for reference and citation management). Of course, having both Mac and PC versions works well as I move between working on my Windows laptop and my Mac desktop provided OneDrive is doing the right thing with the projects and Endnote databases (and I have backups turned on just in case). I also use Microsoft Word every day at work for all sorts of writing, but each revision seems to work less like I do, and I still look back to Word 5.0 on the Mac as my best experience for word processing in Word (I still have the floppy disks somewhere).

One of the other things the Scrivener also do is export in a number of formats. It has the standard wordprocessing and PDF file formats, but it can also export to a variety of eBook formats. I’ve used it to compile a conference paper into Kindle Mobi format and delivered a paper from my Kindle when I couldn’t print and needed the laptop for slides.

However, Scrivener doesn’t do everything I want it to. Currently the Mac version is version 3.0 but the Windows version is version 1.9.7, which means I have to keep running the older Mac version to maintain project compatibility. Also, my iPad is now now too old to run the iOS version of Scrivener which rules out running that with a keyboard when I’m on the go. Finally, for some projects I do end up having to do some final work in MS Word for submission and final editing because that is what publishers are using. This means that versions of the document returned from publishers and reviewers can get out of sync with the Scrivener master version.

There a numerous lists of writing tools on the Internet. Here are a few that might be useful:

Of course, word processing environments each affect the writer in different ways, and we’ll look at that in the next part.

Notes from the Transhuman Frontiers