Religion and Comics: The Golem

The Storying Pastors, Priests and Ministers post generated a flurry other suggestions on Facebook, so here’s the next set of the TV shows that connect with ministry life in one way or another. I have to say, though, that these entries concentrate on the frailty and fallibility of human beings without too many positive examples of ministry or redemptive behaviour (though Father Ted does frequently and effectively point out how odd the church can be).

(I can’t believe I didn’t include this in the first list, given its impact on popular culture references.)

Anyway, this comedy show follows three Irish Roman Catholic priests who serve in the parish of Craggy Island, somewhere in the west of Ireland. Mostly each episode focuses on the lives of the priests as they negotiate the church, other residents in the parish, or each other.

This Danish story centers on a family of priests: Johannes, Elisabeth and their sons August and Christian. The drama is shaped around how Johannes treats his sons and their desperate responses in order to either gain his love or break free from him.

Greenleaf is a TV drama series that follows the world of the Greenleaf family and their Memphis megachurch community they run. The series’ lead characters are Bishop James Greenleaf and Lady Mae Greenleaf, who are the patriarch and matriarch of the Greenleaf family, and Grace Greenleaf, their estranged daughter who has returned home after 20 years following the mysterious death of her sister, Faith. From the OWN web site:

The original drama series Greenleaf from award-winning writer/producer Craig Wright (Lost, Six Feet Under, Brothers and Sisters) takes viewers into the unscrupulous world of the Greenleaf family and their sprawling Memphis megachurch, where scandalous secrets and lies are as numerous as the faithful. Born of the church, the Greenleaf family love and care for each other, but beneath the surface lies a den of iniquity—greed, adultery, sibling rivalry and conflicting values—that threatens to tear apart the very core of their faith that holds them together.

(A manual for how not to do ministry?) 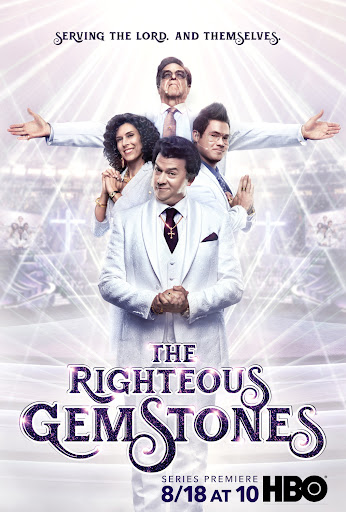 The Righteous Gemstones is an HBO dark comedy centring on the Gemstone family of televangelists and megachurch pastors led by widowed patriarch Eli Gemstone. It focuses on their Eli and his bickering children, Jesse, Judy, and Kelvin, the opulent lives they live, the scams they run, and their family dynamics. (Another manual for how not to do ministry?)

Saint and Sinners is billed as a soap opera about a Southern Baptist church and its surrounding community described as “entrenched in a world of crime, lust, deceit, and greed.” (IMDB).

Religion and Comics: The Golem