In her book, How Games Move Us (The MIT Press, 2016), Katherine Isbister suggests that,

Compelling games don’t happen by accident, any more than do gripping novels, movies, or music. In all these media, creators draw from a well-defined set of strategies and techniques to create a specific emotional experience. (Isbister, 1)

Isbister distills these strategies into three attributes that she sees as essential to creating games the engage their players, not just intellectually, but also affectively. These are:

Increasingly, game designers aim to offer players interesting choices that fall within that sweet spot, generating flow. Flow theory has been a boon to the game design and research communities, moving discussion of what players feel and why away from the vague, if positive, notion of “fun” and into more nuanced emotional territory that can be shaped through design choices. When players discuss the emotions they feel when playing games, much of their vocabulary relates to flow (curiosity, excitement, challenge, elation, or triumph) or the lack thereof (frustration, confusion, discouragement). Thus, flow theory offers a useful lens for understanding the unique emotional power of games compared to other media. (Isbister, 4-5)

I’ve written a bit about this in a book chapter coming out soon which explores the interaction between video games, pilgrimage and spiritual formation. Below I’ve listed some of the games that exist outside of the mainstream of gaming and which aim to create something compelling and meaningful.

This game has your character undergoing a journey towards a sacred mountain. Along the way you explore deserts, mountains and caves, encounter other (online) players (which you can only communicate with in a limited way), discover the story of the land you’re traversing, and have fun just walking, sliding and flying. Originally released for the Playstation 3, it can now be played on Windows, iOS, and PS4. It doesn’t take long to play all the way through but it’s still meditative and pleasant on repeat journeys. One of my favourite games.

Developed by Ryan and Amy Green and a small team this game follows the Greens’ experience of raising their son Joel, who was diagnosed with terminal cancer. The game immerses the user in that world of family life, hospital visits, and the journey to Joel’s death. It is a simple, caring, sometimes brutal, and deeply moving account of grief and love.

The development of the game and the family’s personal story is also tracked through the documentary film, Thank You for Playing, which is something you’ll need a box of tissues to watch. There are themes of love, faith, despair, hope and creativity woven through it.

This is a platform-style game centered on the character of Madeline who is climbing Celeste Mountain. The game is a representation of suffering from mental illness including anxiety, panic attacks and depression, expressing the creator Matt Thorson’s own personal experience of these. It’s a hard game in many ways – the game play is hard and the topic it deals with is hard. It’s a process that, to complete the game, you need to think deeply about yourself, others, and how to live well.

Celeste, then, became a game about taking care of yourself, and understanding that, sometimes, you have to make yourself a priority in order to avoid hurting others. The game illustrates this especially well through Madeline’s interactions with Mr Oshiro, a ghostly hotel owner who can’t bear to let go of a crumbling ruin that represents his former life. Instead, he lives in an eternal state of denial.

Madeline wants to help, so she follows Mr Oshiro through a hotel that’s entirely abandoned save for his own baggage. She does this at the expense of her own goals and well-being, and after a while, it all becomes too much for her.

At the worst possible moment, she decides to ghost on her newfound ghost friend, transforming him into a fearsome manifestation of his own anxiety in the process.

While the level, much like the rest of Celeste, is pretty on the nose, it smartly conveys what it’s like to contend with mental illness while also trying to be a helpful, sociable person. It’s a crucial part of the coping process that arguably more elaborate games about mental illness like Hellblade have missed. 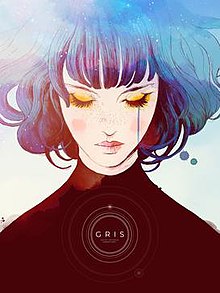 This is a game that explores grief through the central character of a young girl.

Gris is a hopeful young girl lost in her own world, dealing with a painful experience in her life. Her journey through sorrow is manifested in her dress, which grants new abilities to better navigate her faded reality. As the story unfolds, Gris will grow emotionally and see her world in a different way, revealing new paths to explore using her new abilities. (https://nomada.studio/)

You can read a review of Gris here.

But without something to say, all this is basically just window-dressing. It has to be about something. And Gris is plainly, unsubtly, about grief. I say ‘unsubtly’ not as criticism. Subtlety is overrated, and when you’re being as esoteric as Gris is – there’s no dialogue, no character names, barely any characters other than the protagonist – you can happily overplay your hand with your design, and forget to foreground the meaning. But in Gris, from the very first moment, the protagonist’s loneliness is emphasised, as is her loss. She’s lost her colour, she’s lost her voice, she’s lost her grounding, often quite literally, given the amount of falling and floating through the air that happens throughout the game. There’s nothing much else that the game could be about than grief, and that theme comfortably walks the line between subtext and outright text for the duration of its three hours.

Bury me, My Love is interactive fiction that tells the story of Syrian refugee Nour and her husband Majd, as Nour undertakes a perilous journey to safety in Europe. The game was originally released on mobile platforms and later on Windows and Nintendo Switch.

The game picks up on Isbister’s three elements. There are meaningful choices to the made that will affect Nour’s journey, there is an affective component through the relationships developed and recounted, and, while simple game play, challenges to be met. You communicate communicate with Nour through a WhatsApp-style interface, repleat with messages, photos, links and video. Your decisions, through playing the virtual Majd, will have critical impact on the story and on Nour. As the game’s web site notes:

You will also be asked to make important choices – as you are required to do in the Lifeline series and other interactive stories. Nour will regularly seek help and ask for your advice. The happy unfolding of her journey is in your hands. She won’t systematically do as you say though, and sometimes she might also hide things from you. You’ll have to deal with that, as she is the one risking her life.

Communications will occur in pseudo real-time. If Nour is supposed to do something that will take her a couple hours, there will be no way for you to reach her during that time lapse. Once she is back online, you receive a notification that she’s available – and perhaps needs you. How will you best help?

In the next post, I’ll pick up on some other games that also connect with this theme of games that move us.