Christ-likeness in film at Easter

The watching one or more Jesus films at Easter is a common activity for Christians individually or as communities. These might be documentaries or one of the many versions of cinematic Jesus that have cropped up over the years. (For some examples, see my list here at Jesus films – updating media). But while these films might directly referring to the person of Jesus of Nazareth, within the wider cinematic world there are characters whose portrayal and actions resemble, in some way, those of Jesus in the gospels. We’ve probably come across films or TV shows like this, where a character of the situation models or reminds us of Jesus and the gospel stories, and gives us a kind of cinematic Jesus.

This identification is strengthened when the structure of the film follows what Robert Jewett and John Shelton Lawrence call the American monomyth (related to Joseph Campbell’s hero’s journey). They describe particular plot structure as:

A community in a harmonious paradise is threatened by evil; normal institutions fail to contend with this threat; a selfless superhero emerges to renounce temptations and carry out the redemptive task; aided by fate, his decisive victory restores the community to its paradisiacal condition: the superhero then recedes into obscurity.

This structure with its superheroic, messianic protagonist looks similar to the messianic trajectory of the gospels. We might see the hero sacrificing his or her life for their friends or a community in order to save them; or the hero having divine or mysterious origins or being a prophesied deliverer; or being able to both demonstrate superhuman power while also being very human. However, there are key differences from the gospel story. The superhero typically defeats evil by enacting (and therefore redeeming) violence upon that evil, something that jars with Jesus journey to the cross. Moreover, it is almost always a temporary reprieve from evil (convenient for film sequels), while the work of Christ on the cross is seen as definitive once and for all time.

So, given that as a caveat, here is a small selection of films that characters that might be considered Christ or Christlike figures in some way.

The Chronicles of Narnia: The Lion, the Witch and the Wardrobe (2005)

C.S. Lewis’ classic Christian allegory, The Lion, the Witch and the Wardrobe, made its transition to the big screen in 2005, directed by Kiwi, Andrew Adamson. The character of the lion Aslan is titled King of Beasts, the son of the Emperor-Over-the-Sea, and the King above all High Kings in Narnia and is this story’s Christ figure. The Stone Table substitutes for the cross, deeper magic for a ransom/Christus Victor form of atonement, and the White Witch as Satan.

Luc Besson’s science fiction film The Fifth Element brings a mix of action, surrealism, humour, and a classic evil vs. unprepared good together in a way the actually works for the most part. The character of Leeloo, a naive, alien saviour sent to save the world, is the titular fifth element – that of self-sacrificial love. The character has her own Gethsemane moment before choosing to sacrifice herself to defeat the impending evil, and is then ‘resurrected’ at the conclusion of the moving. Oddly powerful given the goofiness of much of the movie.

Whale Rider is for many people an obvious choice for a film with a Christ-like saviour character in Kahu Paikea Apirana. From the being an kind of outcast, to the imagery of death and rebirth located in the riding of the whales, people have made that connection. A question remains though – is this simply an appropriation of the story regardless of the context and culture because we want it to be this way.

The prospect of interpreting the character Pai (short for Paikea) in Whale Rider as a Christ-figure raises some potential objections, because Whale Rider seeks to represent indigenous Maori spiritual traditions, and imposition of a Christological framework onto the film may be viewed as another instance of Christian cultural imperialism. After all, among the world’s spiritual and religious traditions, Christianity holds no monopoly on the valorization of self-sacrifice, and Jesus is not the only figure in the history of religion and mythology to undergo a death and resurrection. On the other hand, both the film and the novel upon which it is based appear after some 200 years of Maori contact with European colonialism, and from the earliest anthropological and ethnographic recording of indigenous traditions until the media portrayals of today, the centrality of the Christ-narrative in the dominant Christian-informed cultures has affected both the telling and the hearing of religious stories.
…
But the portrayal of Pai as a Christ-figure may be read alternatively as a subversion of colonial religion. In portraying Pai as a Christ-figure, the film could be saying in effect, on behalf of Maori people, “We don’t need the white man’s Jesus—we are capable of producing our own Maori saviors.”

David Fillingim. “When Jesus Was a Girl: Polymythic Female Christ Figures in Whale Rider and Steel Magnolias.” Journal of Religion and Film 14, 1 (2010). https://digitalcommons.unomaha.edu/jrf/vol14/iss1/8/.

Comparing Superman to Jesus Christ is fairly common, though the comparison would be better to Moses. In Superman Returns, director Bryan Singer makes the Christ-likeness explicit with Superman hovering over the earth while Marlon Brando’s voice-over from the original 1978 Richard Donner Superman film playing in the background.

Live as one of them, Kal-El
Discover where you strength and your power are needed
Always hold in your heart the pride of your special heritage
They can be a great people, Kal-El, they wish to be
They only lack the light to show the way
For this reason above all, their capacity for good,
I have sent them you, my only son.

Paul Newman stars as the prisoner, Luke, who won’t conform to the prison system and so stands in contrast to the way things work. The film positions Luke as a Christic figure, both in terms of the way the prisoners are influenced by him and in the punishment he endures. This Christian symbolism can be seen after Luke’s death with a final photograph of him superimposed over crossroads at the end of the film, highlighting a crucifixion motif.

The three films, The Matrix (1999), The Matrix Reloaded (2003), and The Matrix Revolutions (2003) follow Jewett and Lawrence’s monomyth structure closely, with each film offering a kind of version of that. This is particularly the case in the first and third films, where the central character of Neo, the One, is portrayed using explicit messianic, crucifixion, and resurrection imagery. 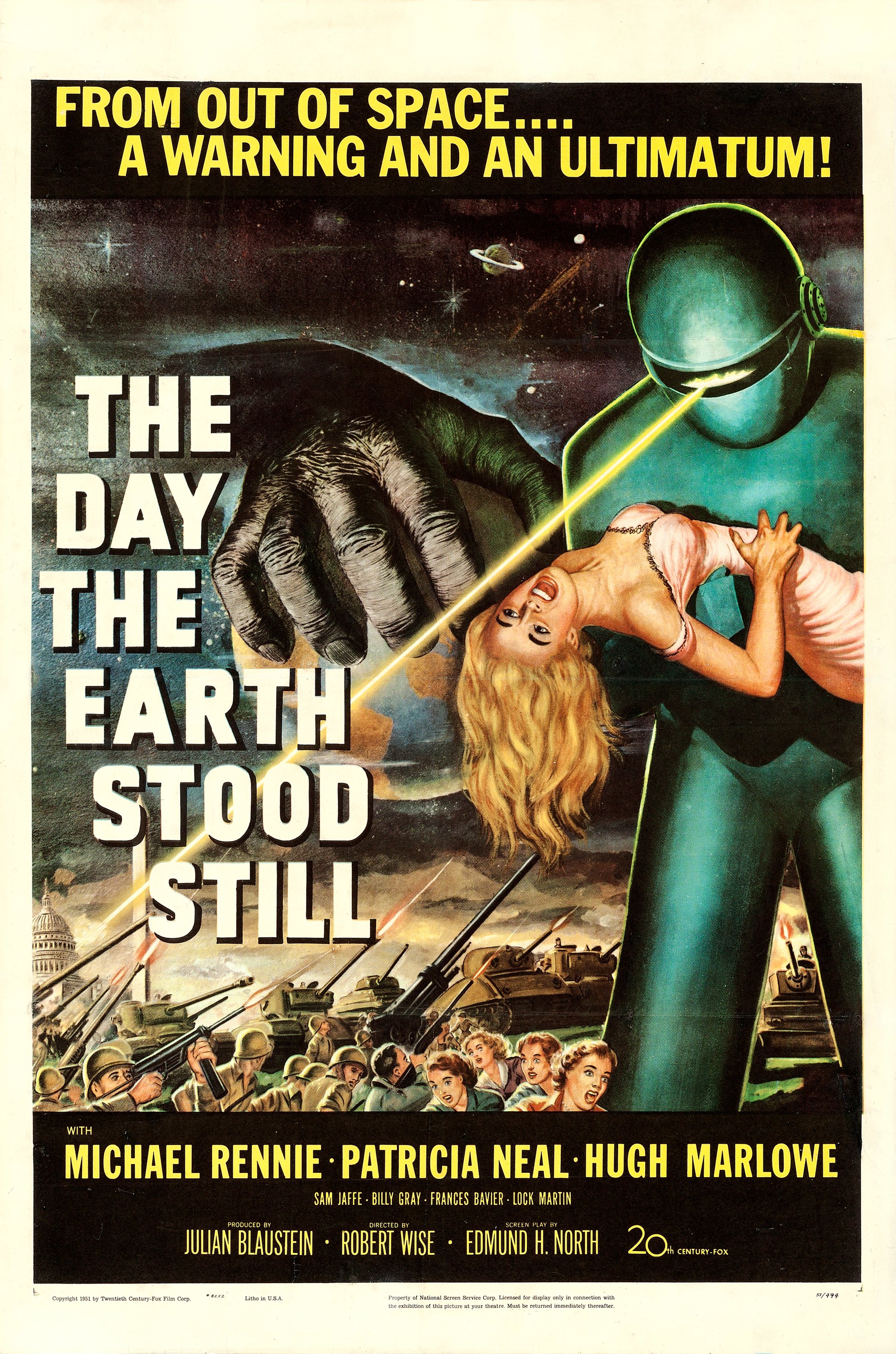 In this 1951 classic, the alien, Klaatu, comes to Earth to judge humanity for its warlike ways and to destroy the earth because it poses a threat to other alien civilisations should humanity’s progress be left unchecked. In order to move around among people, Klatu takes on human alias of Mr. Carpenter (one of many Christic references), experiences the worst humanity has to offer, before forgiving humanity and attempting to save us from our violent nature. (He also has a killer robot – perhaps an apocalyptic angel?).

The movie was rebooted with Keanu Reeves in 2008, but as with most of these things it’s best to watch the original first. A definite classic.